On being a woman.

I've been trying to write a piece on body image for over a year now but it just never seems to come out the way I want it to. I don't know any women who have lived their lives without worrying about the way they look at some stage or other. For some, it's an all-consuming anxiety. For others it's a more casual awareness, perhaps just the occasional urge to lose a few pounds for summer or to get into a particular outfit for a special occasion. Society is saturated with opinions on women's figures, faces, fashion and hair styles (I couldn't think of an 'f' for that last one!). Even the Duchess of Cambridge was exposed to this, courtesy of OK! magazine's spectacularly vile front cover this week, one day after she had given birth: 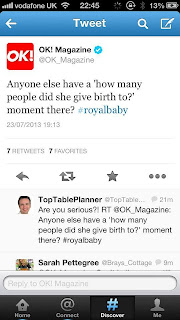 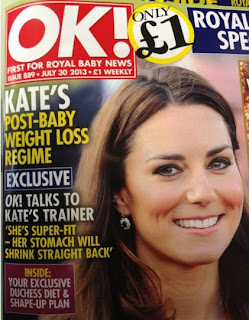 I've since read that OK! magazine have apologised for this feature in the wake of thousands of complaints via Twitter and Facebook. The damage has been done, however. Quite how they explain their comments on Twitter remains to be seen:

Of course, Kate Middleton isn't the only woman to find herself under this manner of postnatal weight loss scrutiny. Magazines and tabloid newspapers of this ilk have long stalked celebrity mothers, commenting on their figures before and after having had children. It's not just post-baby belly and weight gain/loss that comes under fire. Cellulite, stretch marks, lack of attention to make-up and hair - there have been entire "articles" dedicated to coverage of each and every one of these, and not complimentary ones. The overarching theme seems to be that it is not OK to 'let yourself go' just because you've become a mother. You might well have made a tiny person and taken on 24/7 care of said tiny person, but that's no excuse to not look your best.

The effect on the average female can't be underestimated. There is a ridiculous social construct of what constitutes an acceptable appearance for females, and along with that goes the view that women who don't conform to this ideal are somehow deviant and worthy of disdain. In order to be interesting, we must first be attractive.

Last month, Marion Bartoli won the Wimbledon Women's Championship with an absolutely smashing performance. The news coverage of her victory, however, didn't talk about her talent or her journey to the top. It didn't speak of how she could inspire a generation of youngsters to pick up a tennis racket. There was no mention of her home town's pride or how her family would celebrate. What dominated the coverage instead was a mindblowingly misogynistic remark from commentator John Inverdale.

"Do you think Bartoli's dad told her when she was little, 'you're never going to be a looker, you'll never be a Sharapova, so you have to be scrappy and fight?'"

What relevance her appearance has to her ability to play damn good tennis, I cannot figure out. Why Maria Sharapova's looks should have given her an edge is another mystery. How sad that a fantastic achievement by a brilliantly talented woman should be sidelined in favour of discussion on her looks.

Yesterday I watched a short but powerful interview with Dustin Hoffman in which he speaks of the moment he realised the extent to which he had bought into all the crap about women needing to be beautiful in order to be worthy of consideration. It's only 3 minutes long, so do watch it. You won't regret it:


It speaks volumes to me that this treatment of women is entirely subconscious to most people, and that women ourselves perpetuate it unknowingly. It tells me that our social consciousness is so entrenched in having a fixed definition of "beauty" that we have lost the ability to see value and worth in talent & brilliance on its own.

Look to the music industry: find me a female vocalist or musician who is not beautiful by commonly accepted standards. There are very few, if any. It seems that you can't be a successful artist if you're not marketable, and you can't market ugly chicks.

Sidelining women isn't new. Science is full of amazing, brilliant women and their achievements, but they're not household names like Einstein, Newton or Freud. Ever heard of Rosalind Franklin? Without her input, Crick and Watson couldn't have made their discovery of the structure of DNA. How about Nettie Stevens, who made critical discoveries about chromosomes determining the sex of an organism? Mathematics, literature, science, engineering, medicine, entertainment - countless industries and disciplines where the work of women has been marginalised or credited to their male counterparts. Even today the representation of women is unbalanced against that of men. The Bank of England recently announced the inclusion of Jane Austen on the £10 note, but only after a powerful campaign and backlash against the removal of Elizabeth Fry from the £5 note and her replacement with Winston Churchill. Left alone, this would have meant that there was NO female representation on our currency (aside from the Queen, obviously!).

It all comes back to the same thing. Women face an uphill battle to achieve the same recognition and status as men, at the same time being judged for the way we look and the effort we put in to making the best of ourselves. Young girls and women are trained from an early age to worry about their appearances through exposure to the mass media and the ever increasing abundance of vanity products aimed at children. You can now buy high heels, make-up, clothing with the Playboy logo emblazoned across it - PLAYBOY, for heaven's sake! - all aimed at girls under the age of 10.

This has turned into a longer post than I intended, and I still don't feel I've got my teeth into the subject. There is just so much surrounding this issue. The No More Page 3 campaign, Mumsnet Let Girls Be Girls campaign, every bit of feminist writing out there - all of it very much needed. The couple of examples of sexism I've picked out for this piece all relate to incidents from the last month or so. If I was to delve further back, we could be here all day discussing instances of everyday sexism and misogyny.

I think I'll have to come back to this topic when I've organised my feelings on it a little more!
Posted by Unknown at 10:15 am

Email ThisBlogThis!Share to TwitterShare to FacebookShare to Pinterest
Labels: feminism