Let me preface this post by saying that I have no issue with the government taking steps to lessen illegal immigration. What I do have a huge problem with is how this is being handled and the impact it's having on an already tense and volatile situation regarding race relations in the UK.

Two things in this week's news have grabbed my attention and got me feeling all soap-boxy. Firstly, the delightful "Go Home" vans pootling around North London courtesy of the Home Office's latest brain fart: 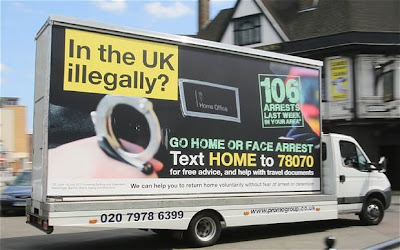 Bleurgh. Where do I start with this. "Go Home"... such a nasty, insidious slogan. There's no way the government chose this without careful deliberation and awareness of the far right connotations to those two little words. It's a phrase often touted by bigoted hate groups and levelled at anyone who looks a bit foreign. You don't drive a van like this around an area with a high number of ethnic minorities without expecting to cause some upset.

Secondly and even more alarmingly are the spot checks at two London Underground stations by UK Border Agency officers. The news has reported that people from ethnic minorities have been specifically targeted by the officers and asked to prove that they have a right to be in the UK. Just picked off the street and treated like a criminal... Riiiight. Yep. I can see the logic in that one. Because there's no such thing as a white immigrant? And definitely no such thing as a British person with brown skin. Mark Harper, Immigration Minister, insists that the checks are based on intelligence and in no way utilise racial profiling but I think that's about as likely as me winning tonight's Euromillions draw.

It occurred to me this morning that three nations who were founded off the back of immigration and invasion also happen to have a beyond ironic problem with racism and prejudice against other immigrants.


Of course there are issues of racism in other countries, and yes this is a very simplistic view of the history of immigration. My point is that immigration is not new and neither are we passive participants.

What does any of this have to do with the UK Border Agency and the Home Office's ham fisted attempts at dealing with illegal immigration in Britain?

The government have made what could generously be described as a real cock-up this week. If I'm feeling sceptical, I may call this a stunt to gain votes from the ultra conservative areas of the UK. At worst it's a divisive ploy, drawing on ignorance and toying with the already fragile relationships between those who make and keep the polices, and those who have to adhere to them. It would not take much to reignite the riot scenes of August 2011 and it seems the government are being ever more explicit in taking steps to repress the vulnerable minorities, whether they be immigrants, the disabled or the poor.

There's so much more to say on this, but for now I shall leave you with an alternative to the Home Office's "Go Home" van. I think this is certainly easier to digest: 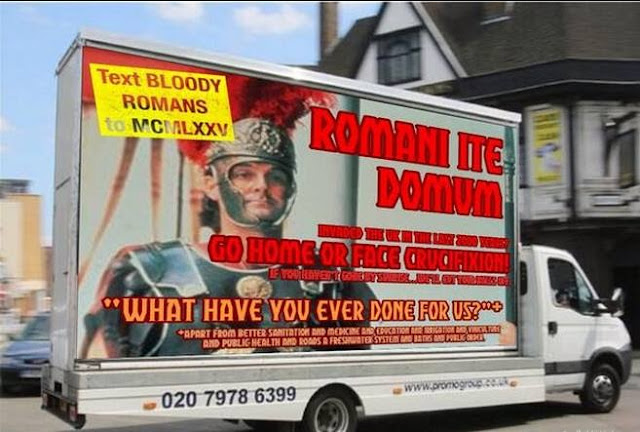