Happy "Screw the Poor" Day, everyone!

Welcome to Budget Day, or as we've come to know it - the day where the government announce the new and innovative ways they've concoted to ruin lives and run this country into the ground.

We were told that this was all necessary, and that our country’s fragile economy would be shored up as a result of all these cost-cutting measures. This should go down in history as one of the biggest LIES ever told by a government to its people.

Here's a handful of truths instead:


So I originally started writing this as a shouty Facebook post to summarise a few key terrible things the Tories have subjected us to since getting their claws back into government in 2010, and what horrors may unfold as the 2016/17 Budget is announced today. I've had to stop, partially because the list is now SO long - and I've barely scratched the surface, and certainly haven't analysed the impact on people's lives - but mostly because it's thoroughly demoralising to actually try and pull together a comprehensive overview of just how bad this government is.

I haven't even touched on what they've done to the NHS, the conditions endured by migrants and refugees, our failure to address our role in climate change, human rights, civil rights, and so many other areas that the Tories are continually wrecking.

We were sold the austerity package as the only hope of stabilishing our economy in the wake of the global financial crisis of 2008/9. We were told there was no alternative, that we were all in this together.

Well as the richest 1000 families saw their personal wealth double since the recession, while the net wealth of the poorest 20% has decreased by 57%, I don't feel very TOGETHER.

With more and more devastating cuts wreaked on the most vulnerable sectors of our society, written into legislation by millionaire MPs who have personal stakes in private companies now holding contracts for the NHS, have massive property portfolios for private rental, and make a fortune from lobbying groups - I don't feel very TOGETHER.

Countries such as Iceland, who were also hit by the recession, have gotten their economy back on track by letting the banks go bust instead of bailing them out, investing in public services and jailing the bankers who caused the economic crisis. Meanwhile, our deficit hasn't even been halved, when Osborne claimed he would have eradicated it by 2015, and we have created more new debt since 2010 than every Labour government in UK history combined.

There was always an alternative. Austerity is a lie, and we continue to be conned by it. Eleven-million voters were conned by their promises in 2015, and now the remaining fifty-five million people in the UK are paying the price.

Every single petition that calls on the government to reverse or halt another devastating decision under the banner of austerity, every last demonstration and protest, every piece of alternative media that exposes their lies - every small and seemingly inconsequential thing we do chips away at their facade. By getting organised, mobilising into a united front, and keeping up the pressure on them, we stand a small chance of making a difference. And if not, I'm sure as hell not going to let them get away quietly.

This seems like a logical place to plug the next People's Assembly demonstration. 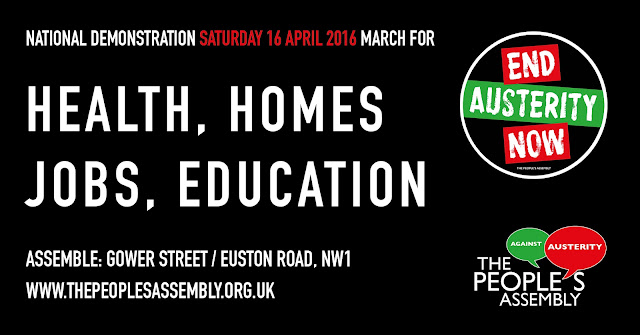