So this morning I flicked on to the BBC News app on my phone to peruse the headlines, as I do every morning. On the "Top Stories" section, three headlines in particular caught my eye as they sat side-by-side in a pool of irony. Firstly: Benefits cap of £500 a week rolls out across Britain, closely followed by Rent 'unaffordable' for low-income families in third of UK, and finally - laughably - PM urged to tighten teenage mum benefit rules.

Wow! That's a lot of demonisation of the poor to digest on a Monday morning at 6am. I'm used to finding right-wing rhetoric saturating the likes of the Daily Heil and the Torygraph, but it seems to be encroaching on all walks of news media now. But what's wrong with these stories?! I hear you cry. Isn't it better for the country for us to discourage the workshy and stop rewarding laziness? Ah! If only that was the truth of what is happening to the low earners and non-earners in Great Britain today.

Here's some figures and facts to digest before we really get stuck into this one:

The UK government spending figure for 2013 stands at £509.4billion, of which £138.1billion is spent on pensions - that's 27.11% - and £62.3billion (12.23%, less than half that of pensions) on the entire welfare budget. To clarify, the welfare budget encompasses in-work as well as out of work benefits and disability benefits. 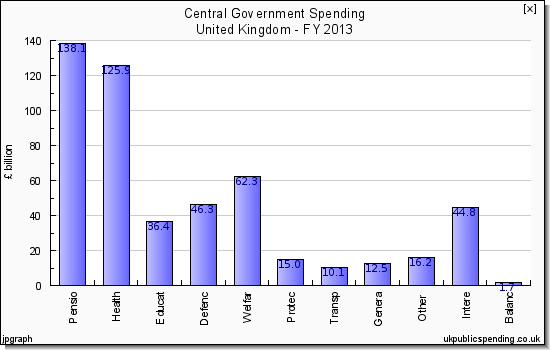 Of that £62.3billion welfare budget, just £9.8billion - a measly 1.9% of the entire government expenditure- comprises unemployment benefits. The rest covers top-ups for low income families, disability, and so on, so forth. This means that the vast majority of welfare expenditure actually goes towards topping up the income of families who are WORKING but whose wages are not enough to meet the ever-increasing cost of living.

Let's just dwell on that for a moment, shall we; Mr. Cameron would like us all to believe that his government's focus is on "making work pay", that the desperate state of the country's economy is down to years of the workshy poor committing the cardinal sins of greed and sloth, while inadequate previous governments hand them wads of cash to sit around in the lap of luxury. It is a lie we've been spun by politicians and the media over the years, conditioned to accept it all with the aim of demonising the undeserving poor and pitying the deserving poor. Thanks to ATOS, we now have a nifty method of disposing of those pesky disabled types, too unwell to be churned through industry but stamped with a "FIT TO WORK" badge and thrown out to fend for themselves anyway. The rate of suicide and attempted suicide amongst those deemed 'fit to work' by ATOS is frightening. What's even more frightening is how little attention these tragic deaths receive in the daily press. We can't risk undermining the government's stance, after all!

And now look at the latest scapegoat: teenage mothers. Hardly new; they have been a favourite target for the red tops and sensationalised television shows for some time now. But now it seems the government may take a more official position against them. The article on the BBC website cites the oft-repeated myth that a young girl need only have a baby and she will be housed, fed, clothed and entertained all at the expense of the long-suffering tax payer. Those who have first hand experience of the welfare state, particularly those who have been young and/or single mothers, will know that this is a far cry from the truth. The papers would have us believe that faith in this myth has urged a generation of young women to become parents solely for the purpose of setting them up in life without having spent a day in paid employment. Yes, there are some girls out there who feel this way. I've met some; I'm sure many of you have as well. But rather than lambast them and bring in legislation that states they will only receive benefits if they live in a hostel or with parents - which is what the article states Mr. Cameron is being urged to do - why not look to the root of the problem? Why punish all young mothers for the tragic ignorance of the few? Where is the focus on education? Why not bring in more transparency about the welfare system and how hard it is to be housed even if you DO have children and no job, or about just how degrading and demoralising it is to live at the handouts of the state?

Practically, legislation like this wouldn't work let alone how morally abhorrent it is. Not all teenage mothers HAVE parents they can live with. The refuges and hostels that already exist are over-subscribed and under-funded. How can they take in a tidal wave of young parents and their babies too? I've got it! Just bring back the workhouses. We can shove all those disabled types and these damnable young parents into there and maybe get industry back on its feet too, if we get all these undesirables put to good use making stuff for the privileged bourgeoisie.

The simple facts of the matter are that teenage mothers, the disabled, the unemployed and the low wage earners are NOT the cause of this country's troubles. Plunging them into further poverty and misery by capping benefits, imposing sanctions, forcing them into unpaid work and diabolical living conditions WILL NOT restore Great Britain to a position of prosperity. It will not "pay to work" until the cost of living is brought into line with the typical take-home pay of the average family. It is so expensive to put a roof over your head, feed yourself, cloth yourself and keep up with the basic utility bills even on what may appear to be a healthy wage. In this day and age, we should not see scores of families struggling to feed themselves on £14 a week, or men and women taking their own lives out of desperation and fear.