Yesterday, June 21st 2014, fifty-thousand people marched through London as part of The People's Assembly march against austerity cuts to public services and welfare imposed by the coalition government.

Along with other members of Milton Keynes Green Party, I joined them alongside representatives from organisations such as National Union of Teachers, Unison, Fire Brigades Union, Socialist Workers Party, Left Unity, RMT, and many, many others.

Chorusing chants such as "No ifs; No buts; No public sector cuts!", "Hey - ho, Michael Gove has got to GO", "They say CUT BACK, we say FIGHT BACK", the crowd set off from outside BBC headquarters on Portland Place and walked along Regent Street, through Piccadilly Circus to Trafalgar Square, and then down Whitehall to the Houses of Parliament, stopping briefly outside Downing Street to call "Con-Dems OUT!". Passers-by took photos, cheered us on and some walked along side us. Cars driving by tooted their horns to show their support too.

When the march had concluded at Parliament Square, speakers took to the podium to talk about the issues that had driven us all to take part in this demonstration. While the few media outlets who have covered the day's events chose to focus on Russell Brand's speech, there were many others worthy of attention. This from Caroline Lucas, for example:

If I learned anything from the day, it was that the number of people disgusted with the government's financial tactics over the past few years is higher than I dared to imagine. It is an anger that has united many and varied groups and organisations in the UK, all of whom demand an end to the demonisation of the poor, the exploitation of the vulnerable, the contempt for public sector workers, and the greed of the corporate elite and their government allies.

This was not a standalone action. There are strikes to come, further demonstrations later this year and a committed campaign from The Green Party - who are the only mainstream political party with a manifesto that promises fair and equal treatment for all, regardless of wealth or status.

The BBC and most mainstream media outlets elected not to give even a whisper of coverage to yesterday's demonstration. While I'm not surprised by the likes of the Daily Mail or Telegraph failing to bother with it, we should all be dismayed that the BBC, who claim to be a politically impartial news source and who are publicly funded by the licence fee - are clearly operating a right-wing, pro-coalition government agenda by covering up the people's endeavour to make heard their objections.

Social media is a powerful tool, and many others like myself are trying to raise public awareness of yesterday's action and forthcoming events. Wherever you see a photo, blog or lesser-known news story about the demonstration, please share it and keep on sharing it. We don't have the luxury of mass media on our side to tell those who are sitting at home - frightened and desperate because they're suffering due to savage austerity measures - that there are people out there fighting for them, trying to stop an already dreadful situation from being made worse. We can only give a voice to the voiceless if we come together and don't stop telling the world that enough is enough and that things must change. 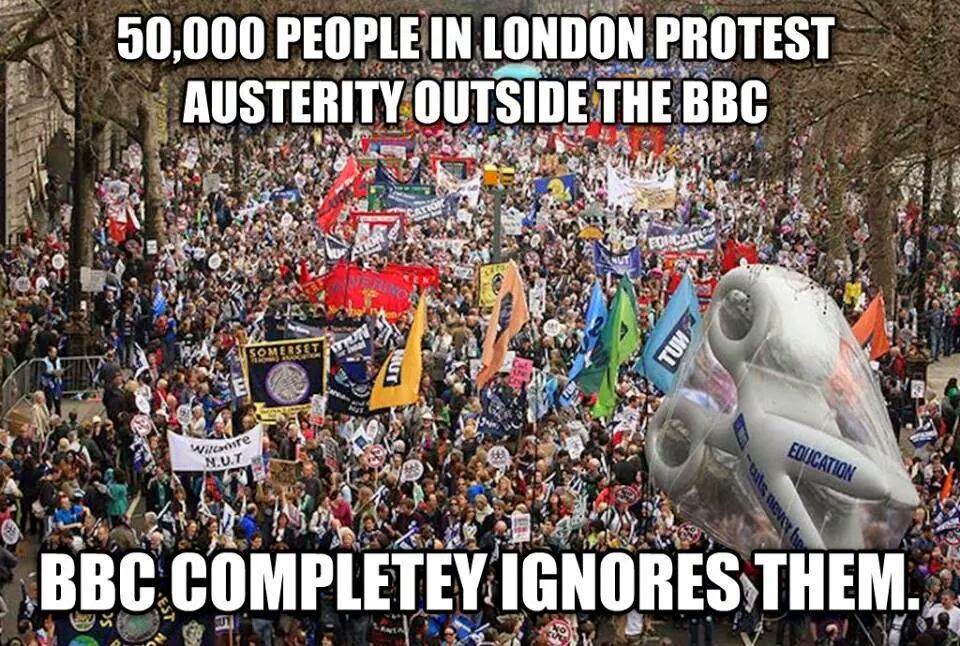