Big Brother is Watching You

"It was terribly dangerous to let your thoughts wander when you were in any public place or within range of a telescreen. The smallest thing could give you away. A nervous tic, an unconscious look of anxiety, a habit of muttering to yourself--anything that carried with it the suggestion of abnormality, of having something to hide. In any case, to wear an improper expression on your face...; was itself a punishable offense. There was even a word for it in Newspeak: facecrime..." - George Orwell, Nineteen Eighty-Four

This week, my reactions to the news have been brought to you by the letters W, T, F. The period after the Conservative Party conference was never going to be anything other than stressful, as numerous plots to make our lives ever more miserable were gleefully unfurled while Iain Duncan Smith literally fist-pumped the air with joy:

If there's a Tory I dislike even more than Iain Duncan Smith, however, it's Theresa May. They're all reprehensible, morally-bankrupt filth in my honest opinion, but May's unwavering assault on human rights legislation just cranks up my loathing another notch.

A year ago, I read her pledge to withdraw the UK from the European Convention on Human Rights (ECHR), which came just a couple of weeks after the country was outraged at the detention of David Miranda under spurious interpretation of the Terrorism Act (2000). To be detained for nine hours, prohibited from accessing legal representation, compelled to answer all questions asked of you and having your personal effects confiscated - when you have done nothing wrong and given no indication of wrongdoing - surely constitutes a breach of human rights. Yet the incident was ruled lawful by the Home Office, and now the Tories want to bring in yet more legislation that systematically dismantles our basic expectations of human rights, under the banner of "fighting extremism and terrorism".

It sounds a noble cause. Nobody likes terrorists. Extremism, as we've seen with ISIS/ISIL and Al Qaeda, is very dangerous indeed. But we are fools if we believe that this is the extent of the Tories' interpretation of extremism.

Just three months ago, news broke that Green Party members, Jenny Jones (Baroness Jones of Moulsecoomb) - and Councillor Ian Driver, had been added to a database of "domestic extremists" despite neither having a criminal record. Along with thousands of other political activists, their right to lawful protest had been reclassified as "extremism" and used to justify the storage of personal details and photographs on secret police databases around the country.

One of my earliest blog series looked at Human Rights and Human Wrongs, in which I explored (at length!) the logic behind my view that we must always observe the basic human rights of everyone, even the most abhorrent criminals. You can read parts one, two and three here (get comfy first). Essentially, human rights are absolute and inalienable; one does not "earn" them, nor can one have them revoked. That philosophy is fundamental to protecting the human rights of me, you and every other ordinary nice person. The minute we start deconstructing the human rights of people deemed to be unworthy of them, we are on a very slippery slope which threatens anyone with a predilection to challenge the status-quo.

If Baroness Jenny Jones can be labelled a "domestic extremist" for her political activity, so can I and so can you. My husband jokes that if I'm not on some CIA watchlist by now, he'd be very surprised, but there may well be an element of truth in that. After all the definitions of extremism, and the legislation that criminalises them, are constructed by the people whose interests are best served by censoring dissent and preserving the social state which keeps them in government.

We have also heard this week that Theresa May plans to implement "Extremist Disruption Orders", which will see people banned from speaking at public events, taking part in protests, having to submit to the police in advance any publication on the web, social media or in print, and having social media closely monitored. This is not limited to those preaching hate or radicalising young Muslims; David Cameron has said that this will look at "the full spectrum of extremism" and those who threaten to "overthrow democracy". I would be intrigued to hear more of Cameron's definition of democracy, given that he acts as Prime Minister in a country where two-thirds of voters voted for someone else.

The past five years of Tory governance have seen inequality increase, child poverty go through the roof, untold numbers of suicides in the wake of callous benefit sanctions and ATOS "work capability" assessment, UK debt increase, NHS services privatised, social services cut, care homes closed - the list goes on and on and on. If you are anything other than wealthy in the UK right now, life is pretty scary and set to get much worse if the Tories are re-elected next May. I consider it my moral duty to devote time and energy into getting them out of government and fighting for a decent standard of life for everyone in the UK. Theresa May and David Cameron would probably call me a domestic extremist for that view and for my role in countless campaigns to overthrow the Tories, which puts people like me right in the firing line for all this anti-human rights rhetoric.

Do not trust that this policy is simply about fighting terrorism in the form of violent aggressors. It is very much about enshrining the right of politicians to censor those who would speak out against their war on the poor. 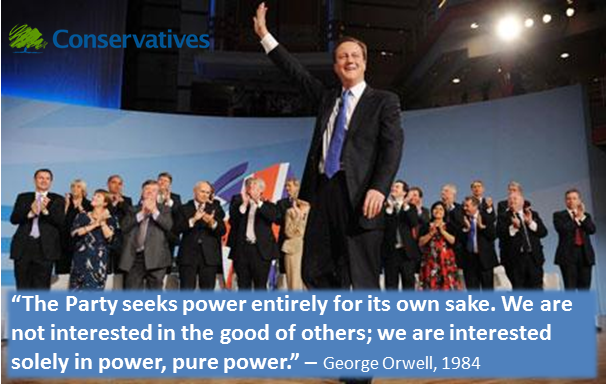