Immigration is a good thing. So there.

It's a contentious topic and one fueled with misconceptions and outright lies from certain corners of the media and political sphere. The general public are worried, no doubt due to politicians using words like "under siege" to describe the changing population of the UK. UKIP would have us believe that Britain is set to become a distant memory, while Eastern European migrants take over and we all start speaking Polish or Romanian or Bulgarian, or some mangled mixture of all three - but crucially with no trace of Engerlish remaining. 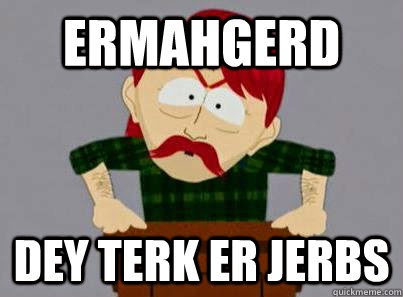 I'm being hyperbolic, of course, and I don't mean to come across as flippant. When you do start to research the facts and figures behind UKIP's claims, you quickly realise how absurdly laughable they are.

What stops them being seen for the joke they are, sadly, is the tacit endorsement of their fallacious claims by the Labour and Conservative parties, who have responded to their rise in support NOT by deconstructing their rhetoric and promoting a more accurate picture to the electorate, but instead by competing in a race to the bottom on who can come out with the most hardline policy on immigration.

Where have all these beliefs come from? When I go out, for example, to collect my children from school, there's a definite mix of nationalities and ethnicity, but still an overwhelming majority of white British families. When I go out shopping, I see the same thing. Yes, there is diversity, but it's nothing like the "swamping" that some would have us believe.

I've said before that this anti-immigration rhetoric forms part of a wider smokescreen designed to keep the electorate enraged about a total non-issue while the genuinely damaging problem - i.e. the carefully cultivated wealth inequality - goes unchallenged. While we waste time debating immigration issues, we are not talking about the economic crisis, or how the UK is in more debt now than before the coalition government took control; we are not talking about about how the European economy is MORE fragile now than in 2007; we are not asking where the £46billion taxpayers' bailout given to RBS has gone; we are not throwing every fibre of our being into protecting our NHS from privatisation, or even into understanding what privatisation means; we are not vilifying the government for the callous welfare reforms that have seen over 1million people turn to foodbanks, and incalculable numbers of disabled people die within weeks of having their lifeline benefits stopped.

There are genuine problems with the UK at the moment; real issues that must be addressed. But immigration is nothing, nothing like the thumping great threat that UKIP, the Conservatives and the rest would have you believe.

Let's take a look at some numbers.

University College London, in collaboration with the Centre for Research and Analysis of Migration, last year published a paper titled "The Fiscal Effects of Immigration to the UK". Their research uncovered some astonishing findings:
Is your mind blown? Mine isn't, because I had suspected for some time that immigration is not only positive for the UK, but actually necessary for our economic survival. "Now then", I hear you murmur, "if this is all true, why don't the government just admit it?". Well that is a very good question, and I wish I knew the definitive answer. You don't need to look very hard for evidence that the government are not only aware, but actively trying to conceal the real picture of immigration to the UK - earlier this year, they came under fire for blocking the publication of a report which would have blown open all their reasoning for tightening up EU migration!

"But there ARE more of them!!"

Yes. Yes there are more "of them" than there were last year, and the year before that. Specifically, net migration (that is, the total number of people coming into the UK minus the number of those leaving) for the year ending March 2014 was 243,000 compared to 175,000 in the previous 12 months.

Hold your horses! Never take numbers out of context. Let's look at the bigger picture...

Total immigration in the year up to December 2010 was 575,000, while in the year up to December 2012, it fell to 497,000. As emigration from the UK has hovered between 316,000 and 350,000 per year, a clearer picture starts to emerge. In terms of population percentage, the net migration figures are not fluctuating all that much - certainly not enough to justify the outrage meted out by the noisy right-wingers.

Here's a little graph for you:

It's right there in black and white (and green and blue and pink). The picture of immigration in and out of the UK over the last decade really hasn't changed all that much.

So back to these problems facing the UK today; the housing crisis, the strain on the NHS, low-paid jobs. I'm going to elaborate on each of these topics in subsequent posts, but let me just say that not one of these problems is caused by immigration.

The housing crisis in the UK is a mess. Briefly, between the government selling off 2.5million council houses through the Thatcherite "Right to Buy" scheme and not replenishing the stock with new builds, we now have 1.7million people on council house waiting lists across England alone with nowhere to put them. Alongside that, soaring house prices and mortgage rates have been exacerbated by the rise in houses being used as commodities for investment rather than homes, making it more difficult than ever for first time buyers to afford a home. Meanwhile the private rental sector has exploded, now accounting for more than 13% of housing across the UK but with soaring rent, no long term security for tenants and the ever-increasing instances of homelessness caused by tenants finding themselves at the end of one tenancy but unable to afford the myriad fees of another.

Without private rent caps, the immediate introduction of more social housing and a drastic overhaul of the definition of "affordable housing", the housing crisis will not get any better. Immigration has not caused this, the government's appalling mismanagement has. Capping or reducing immigration will not alleviate it. Only sensible, proactive intervention from the government will.

The coalition government's attack on the NHS is scandalous. The model, very simply, works like this: slash the budgets --> services decline --> "outsourcing" is heralded as the knight in shining armour --> wham! We have sleepwalked into a privatised health care system.


Do you remember David Cameron's pledge to not expose the NHS to pointless restructing? I do. And yet the abysmal Health and Social Care Act (2012) has brought about the biggest top-down reorganisation of the NHS in living history, not to mention removing between £60-£80billion of funding from the now-abolished Primary Care Trusts and giving it instead to Clinical Commissioning Groups, who are a prime source of entry for private companies to gain health provider contracts. Crucially, this move was not in the Conservative or Liberal Democrats' manifesto, so the public never had the opportunity to vote against such massive changes to the functioning of the NHS.


I will blog in more detail about the true cause of the NHS crisis, but you can read more here for now: Twelve Things You Should Know About the Tories and the NHS

Once again, waiting time for GP appointments, hospital closures and downgrading, waiting lists for treatment - none of it has been caused by immigration. ALL of it has been caused by massive government budget cuts. Capping immigration will not relieve the situation; only reversing privatisation and investing back into our hospitals and health services can restore the NHS to its rightful state. Incidentally, did you know that 26% of NHS doctors are non-UK born? Our lives, quite literally, have depended on immigration.

And we roundly return to the "dey terk er jerbs!!" argument. Anecdotally, I've heard this a thousand times over. British workers are turned away while the jobs are given to migrant workers who will accept a lower wage.

Firstly, this is largely a myth. In the few instances where this has happened, why does the migrant worker shoulder the blame instead of the unscrupulous and exploitative employer? Why aren't we stamping our feet and demanding the immediate implementation of a Living Wage for all employees, regardless of their country of origin?

Back to the myth-busting. There is a 52 page government-commissioned report from the Migration Advisory Committee which you can read for yourself here. Briefly, the report found that the impact on wages from the flow of migrant workers was minimal, and there was only a weak - but not causal - correlation between the two. It also identified that there are specific areas of the country where migrant communities are more concentrated and so the perception of the impact of immigration will obviously be skewed.

Plainly, there is no evidence to support claims that migrant workers are harmful to British employment prospects. Where exploitation by employers occurs, this must be dealt with by enforcing existing legislation about pay and introducing a Living Wage for all workers in the UK. Immigration in and out of itself, has not driven down wages. Capping immigration will not result in a pay rise for UK-born workers. Only decisive action by the government to recognise the current massive pay gap and support employers to pay proper wages can relieve this.

Considering that this will rank amonst one of my more epic blog posts, I really only have scratched the surface of the massive and intricate topic of immigration. I haven't even begun to talk about asylum seekers, illegal immigration, or the actual practicalities of any kind of immigration cap, but if I try now my fingers will fall off, and if you have to read more of my opinions, I suspect your eyes will mutiny.

I hope that I have successfully unravelled some of the commonly held myths around immigration and at the very least prompted you to question some of the claims made by the likes of UKIP and the Conservatives. I leave you with this image from Another Angry Voice: 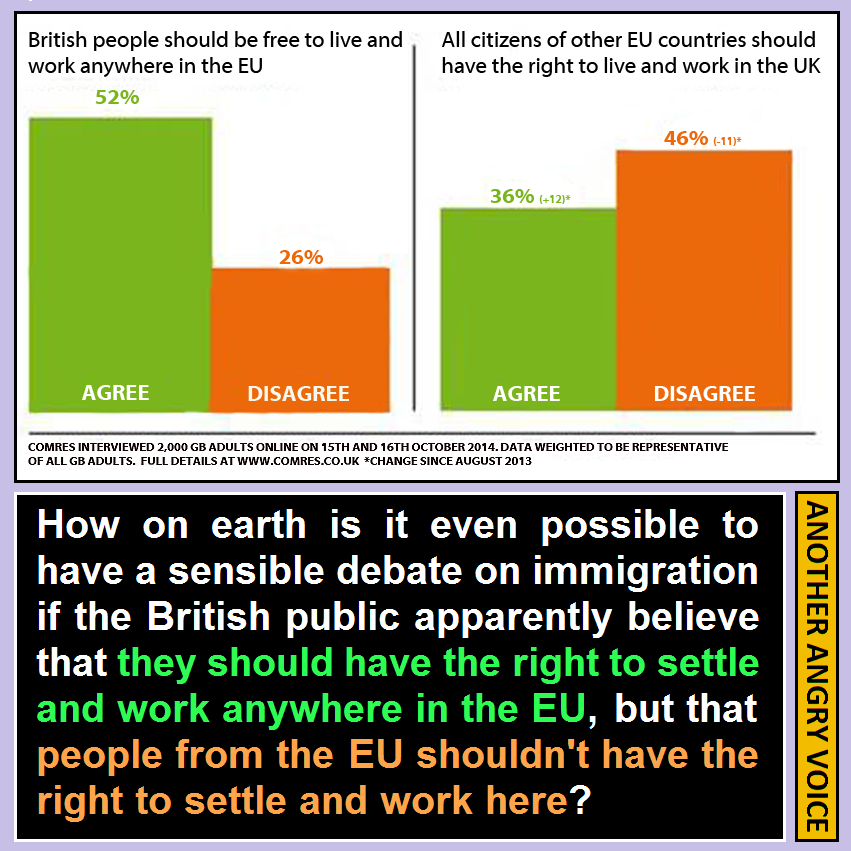